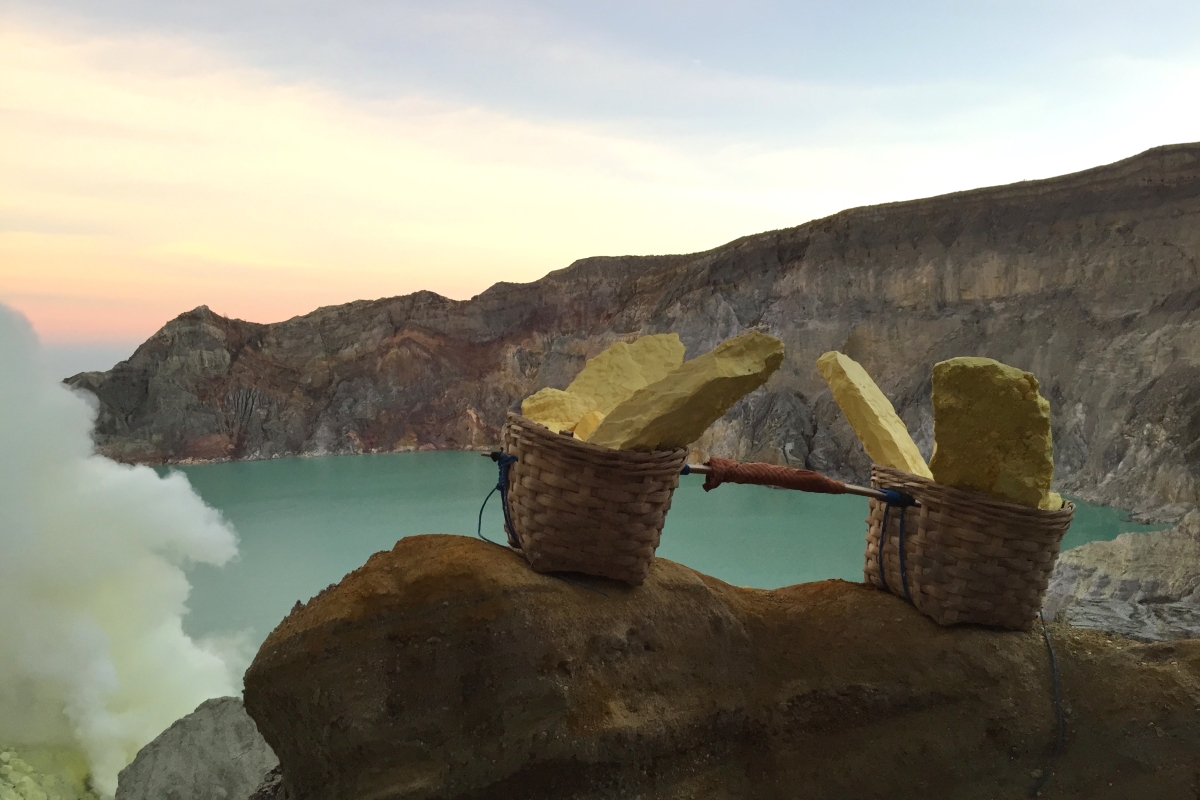 I woke up at 1 a.m and got packed for Ijen and Banyuwangi. Our driver was so glad that I could speak Bahasa and asked me to get to the front seat.

(Shorter version of this story was featured on Steller!)

The narrow road to Ijen was extremely rocky and bumpy. I thought I could catch some sleep along the way, but my head got tossed to all direction. It was annoying. And I was too lazy to actually converse with the driver, whom I could tell was trying to stay awake. I periodically asked him questions just to make sure that he was awake.

There were other tourist groups that were going to climb the volcano and each group was assigned to different guides, but everyone ended hiking together. I only recognise our guide from the sarong he wore around his head, exposing only his eyes. It was really cold that morning. Before the hike, we were assembled near a camp fire. I have never stood in front of a fire for a reason other than to BBQ. The radiating heat was like my new best friend, so nice and comfortable. It was my first time reaching out my hands towards a fire in need of warmth.

The thing that motivated me to hike for the next 1 hour and 45 minutes were the thoughts of people judging me from how out of shape I am. Fortunately the starry sky occasionally distracted me from those kind of thoughts. I could see the freaking MILKYWAY. I could only describe what I saw as a river of stars in the sky. It was so beautiful. And the shooting stars, oh wow, the way they left their marks in the sky for just a split second amidst of thousands of other stars was incredible. I couldn’t describe how excited and in awe I was. Every time I saw one, I wanted to ask people near me if they saw it. But it was dark. I couldn’t see who I was with. Looking up for once in a while was good. It helped breathing too.

I admit, I cursed quite a bit during the hike. The slopes were steep! At some turns, I had hoped to see a flat path, but it was just steep slopes all the way. I could feel my heart pumping really hard like it was cracking my chest, but I kept telling myself, “Don’t be the typical fat guy. Just don’t”, and just pushed myself all the way.

I was really happy when I got to the flat surface that I had been hoping for. But we had to go down to the crater to see the blue fire and man, it was a tedious journey. But the blue fire at the bottom of the crater was surreal. So, going down to the crater was worth the sweat! I couldn’t take a good picture of it, mostly because I was so indulge in admiring it. It was like watching a sci-fi movie, with really good CG. Except it was real. So majestic. I tried to get around the crater to get a good look of the fire, but the sulfur smoke was terrible when it got my way. I was only wearing a simple surgical mask. Some people rented special breathing masks from the guides. But I wondered how many people had used the thing before them. Anyway, my simple mask helped a lot, still. N95 would have been better.

There were rocks everywhere on the way down to the crater. The miners were carrying their 70kg-or-so sulfur up to the caldera and they were the reason why I pressed on. Such hard workers! I asked our guide how much they’d get from those load and he said Rp 1,200 per kg. Usually the miners would do the hike we did twice a day, with 70-80 kg load when they return. I couldn’t even lift the load. Hiking with it is unimaginable.

The group supposed to get back up to the caldera to witness the sunrise. But we spent quite a lot of time taking pictures at the crater and really took our time to get back to the caldera. After snapping more pictures at the caldera with the miners, we finally made our way down at 6 a.m. When we just began our decent, the scenery before me was beautiful. I saw the nearby mountains like mount Meranti and Raung. But as we decent some more and as the trees closing in and blocking the view of the mountains, the walk back to the carpark became so boring. I wanted to reach the bottom so badly, roll myself down if I could. It wasn’t hard, but there was nothing to see other than downwards slopes of the brown soil. I slipped quite a few times. I guess it was a good idea to have a walking stick.

We were given some time to eat breakfast at the car park and I got to talk to one member of the group. I was so inspired by him, I think I should mention about him again in this post. He was from 67 from Paris. He hiked ijen up to the caldera. He didn’t get to the crater because it was already sunrise by the time he reached. Still, I think he was so strong! He told me that he was on his retirement trip. He travelled by his own from Bangkok, KL, Borneo, Sulawesi, Lombok and now Java. He bragged about renting motorbike where ever he stayed. He loved exploring the cities by motorbike. I would love to be like him when I retire.

I continued the trip to Banyuwangi and talked a lot with the driver. He was 27 with 2 kids. His job is to drive the van filled with tourists from Bromo-Probolinggo-Ijen-Banyuwangi-Surabaya and repeat. Very hard working! He was really nice too. But I got cheated by his friend with the expensive transport fees. I told him it wasn’t about the money. I just wished that people are nice enough to actually leave good marks in others’ memories. I gave him some tips after dropping me at a hotel in Banyuwangi. Hopefully he got my point.

The hotel that I was dropped at was this old hotel costing Rp 220,000 a night. I asked to see the room first and it was terrible. I’m sorry, but with that price the room was with fan and squat toilet? I asked the staff if there were any other hotels nearby, he said no. He said it was the only hotel by the road. I didn’t believe him and thankfully, I didn’t. Thanks to the traveling apps, I got to check if there were other better options. There were at least 5 other hotels along the same road. One was even rated second on Tripadvisor’s list. On the way there, I got attracted by a well-decorated hotel (Mahkota Plengkung) and decided to check it out. With Rp 250,000, I got a standard room with air-con and hot shower. It was hard to turn it down. I wanted a good night rest after lacking of sleep the past few days. Later, I found out that the rated hotel (Permata Indah) was just next door to mine and cost Rp 75,000 for the fan room. It was the only room-type available. Oh well, I guess I deserved the comfort of a proper hotel by now.

I dropped my laundry just nearby and bought snacks before spending the rest of the day in the room, watching ridiculous Indonesian dramas on TV and sleeping. It was only 10 am in the morning. It was the best relaxing day.