I had the best quality sleep last night after such a long time. Waking up at 5 am in the morning was not a problem at all. Everything was packed and we were ready for a somewhat 8-hour journey to Tarutung. We did grocery shopping the day before and I bought a lot of snacks. For myself. Unless there were people who want some.

I have visited Parapat quite a lot of times, especially in my childhood. Parapat is a town strategically located just beside of Toba Lake, one of the largest volcanic lakes in the world. Tarutung is about another 2-3-hours drive from the town. The thing is, I have never paid attention to the towns that we pass along the way to Parapat, let alone Tarutung. So, I convinced myself to pay attention to road signs this time around.

So, please don’t mind the awkward format of this post which is based on time stamp after we made our move out of Medan. These were the sequence of the towns that we passed by on the road to Tarutung. There were probably more towns in between, or maybe the names below are districts instead of towns. I only read sign boards on shops by the road side and welcome signs when entering the towns/districts.

7:45 Bengkel – Known for its dodol,  which is a thick, sticky and sweet snack made up of coconut milk and rice flour. Dodol is available in durian, vanila, pandan and other flavours. It is sold at every shops by the road side along this town, which made it easy to know where I was. I like dodol, but never really finish a packet of it because of its sickening sweetness after just a few bites.

8:45 Tebing Tinggi – It was easy to know where I was because of the rubber plantations that stretch for kilometers! I honestly think that the area is good for pictures. There are thousands of same sized, evenly spaced trees, with ground covered by light-brown fallen leaves. But the narrow road made it inconvenient to stop. Upon reaching the main part of the town, we stopped by for toilet break. We continued our journey at 9:10. 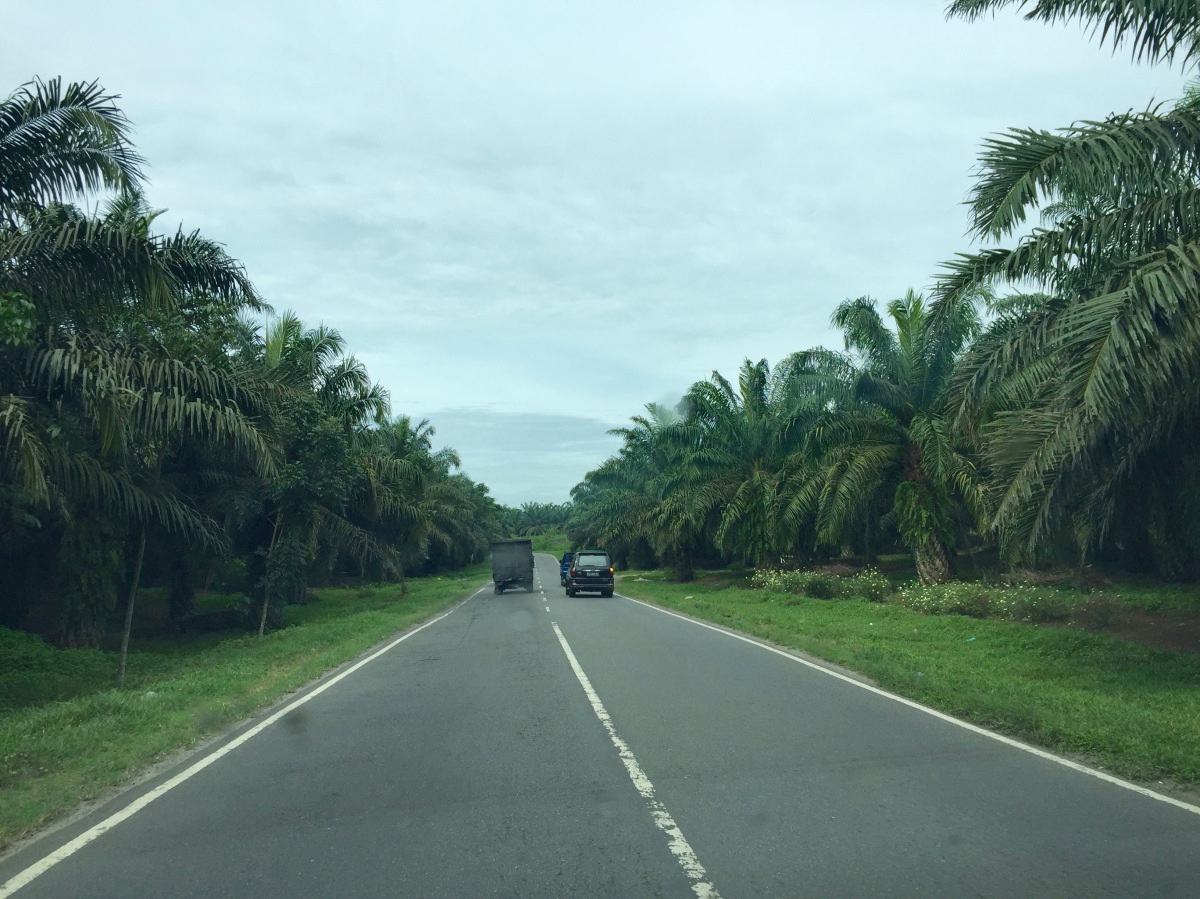 10:10 Siantar – A big town, this one. I don’t really know what it is famous for, but there are many famous noodle dishes from here. I’m pretty sure there are “Mie Siantar” (Siantar noodle) sold in Medan. That’s saying that the noodle from Siantar is different, right?  The town is the only one -along the way to Parapat – with a shopping mall.

10:20 Moved off from Siantar after another short break. Always in my mind that passing Siantar means that Parapat is really close already. That is very subjective though, because as a kid, I always slept in the car. I only recognised that the nap after leaving Siantar (usually after lunch, which is the best time to nap) felt like the shortest and the best nap on the road trip, though in real time it took us at least an hour drive. One thing for sure, there is no more palm tree plantation towards reaching Parapat. Instead, it is just a stretch of dense forested area. 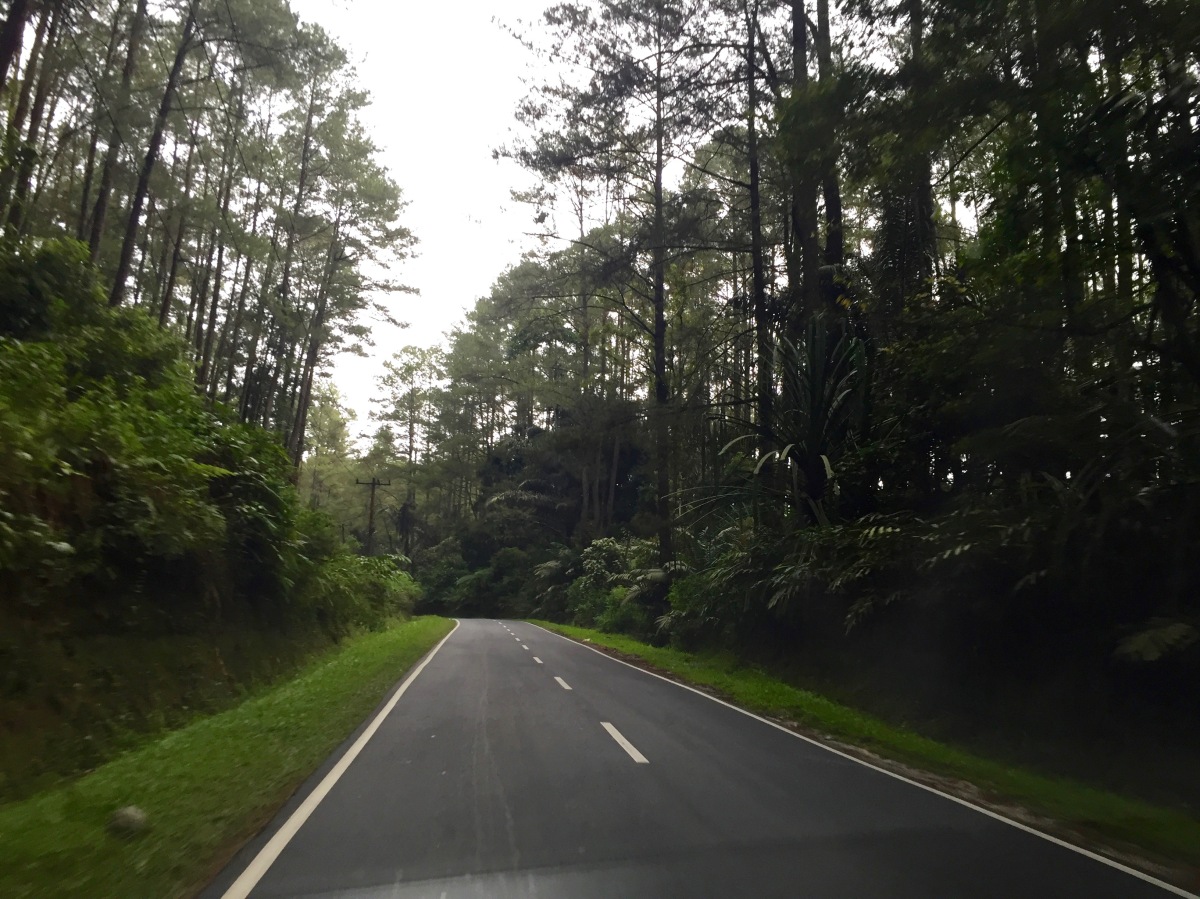 11:15 Parapat. As we passed by the “welcome” sign, I knew the beautiful view of Toba Lake was near. I took this picture right after ‘the view’ was visible from the car.

I like how it only took one turn on the road to see the huge lake. Suddenly, we were there. 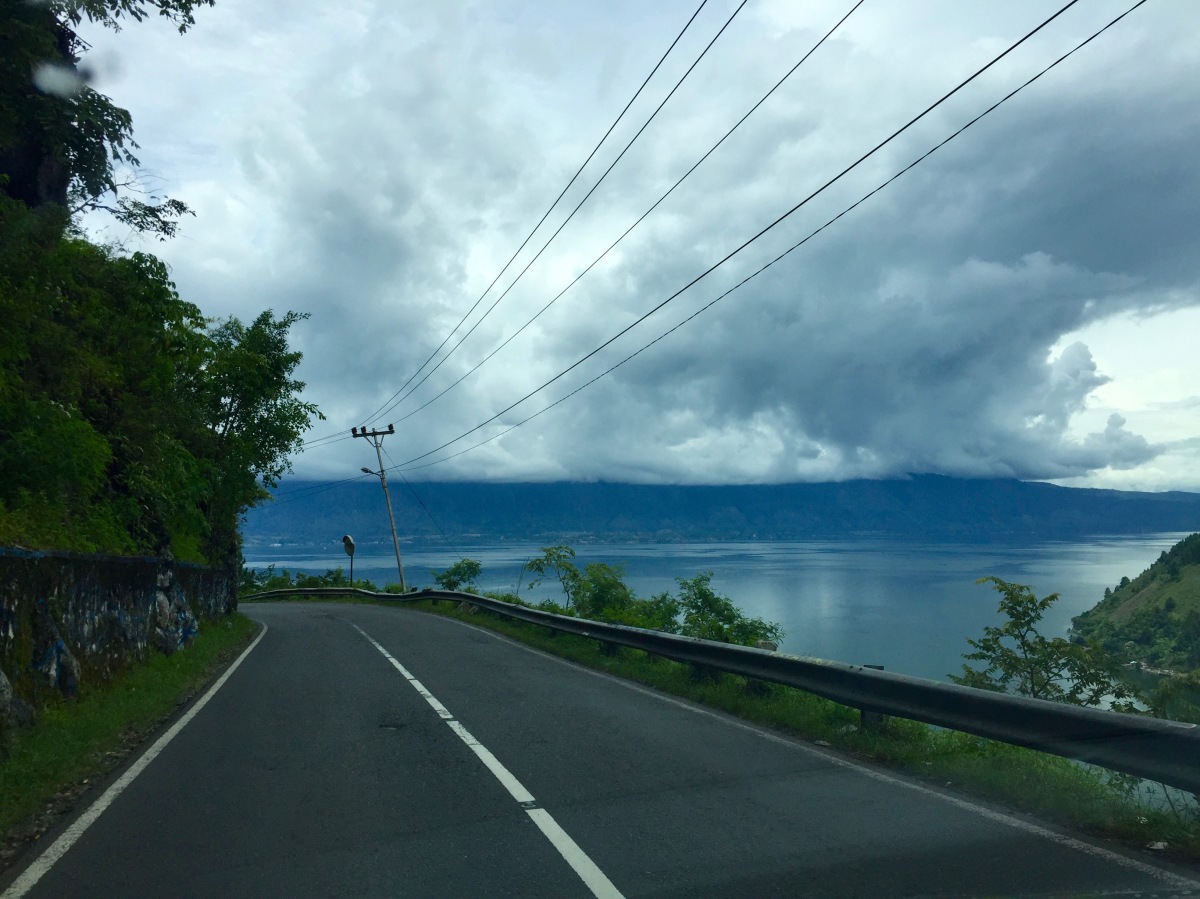 I could not resist to stop by the shops by the road side to enjoy a warm cup of instant cappucino, overlooking the spectacular view of the lake and samosir island. 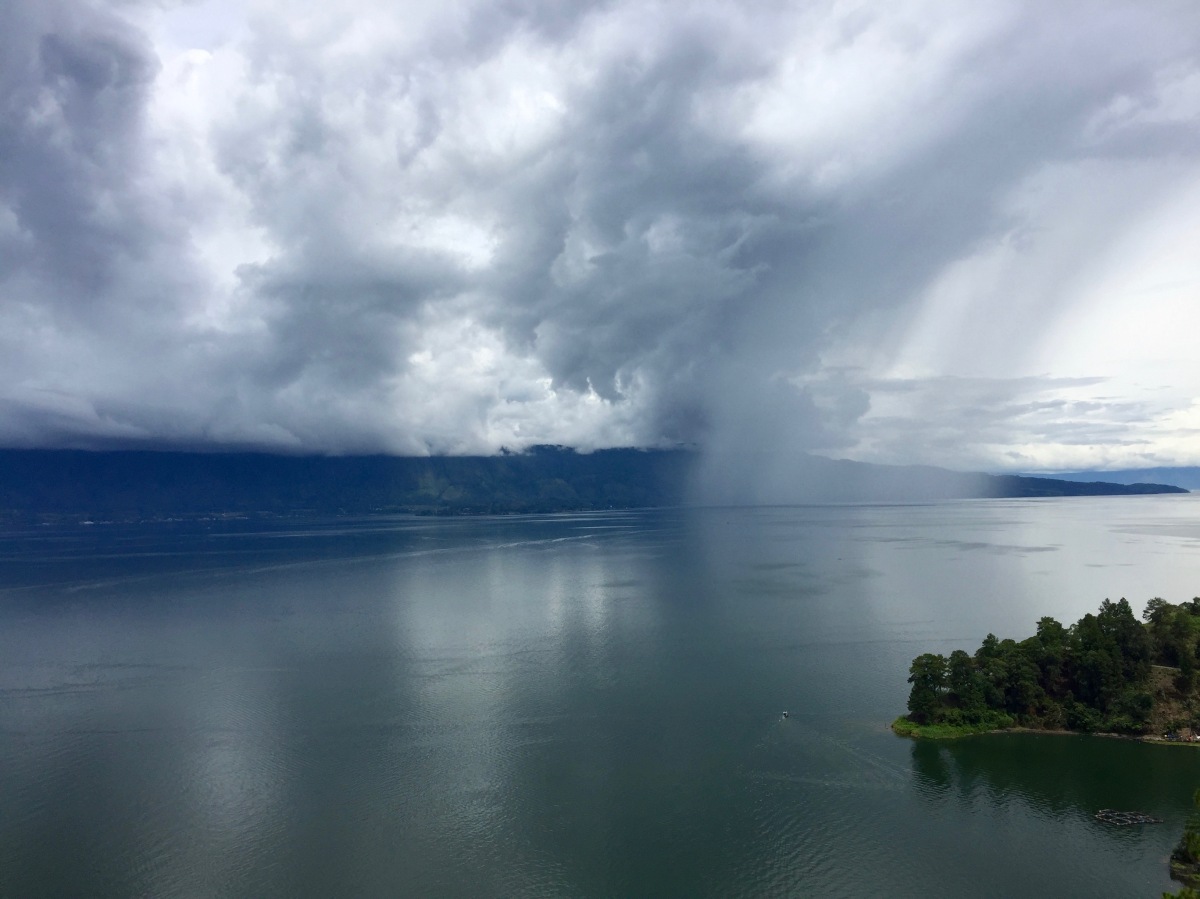 12:00 We stopped by Restoran Asia for lunch. It is a chinese restaurant that has been around since I was a little boy. We always eat here whenever we visit Parapat. Their food and the restaurant interior never change. Their asparagus with crab meat soup and fried chicken are my all-time favourite. We left the restaurant at 12:40. 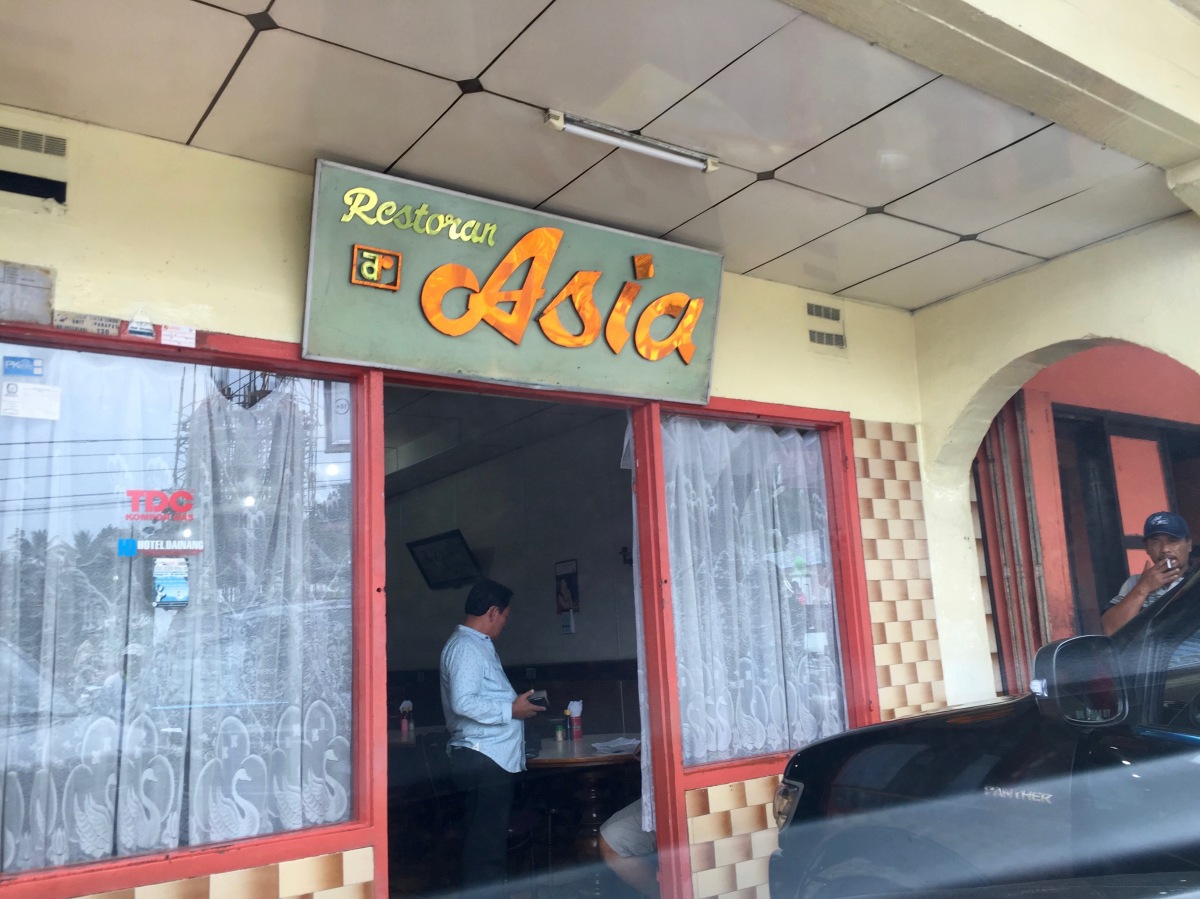 13:40 Porsea. Along the way, I was dozing off because of the delicious food we eat for lunch. I just had to tell our driver to stop for awhile to take pictures of the paddy field, also for them to smoke it off.

14:20 We were at Balige for toilet break. It was raining heavily. I was worried that I we would not make it on time at Tarutung, also that it was not the best weather to hike up the hill to Salib Kasih (Cross of Love), as originally planned. Anyway, Silalahi village is near by Balige. There is a tale about how one Silalahi arrived at the town long, long time ago. I’m not going to write about it here. We moved off at 14:45.

15:30 My dad requested us to stop by the ancestor’s grave at Siborong-borong. So my sister and I did. Our grandfather is buried in Medan, but this is where my great-grandfather and my great-great-grandfather were laid to rest. It was nice to visit the graves. My thoughts on this worth another post. Anyway, we bought the famous ombus-ombus, a steamed shaved coconut dessert filled with brown sugar. Delish!

16:30 It was still raining in Tarutung, albeit the rain was slowing down. But it was almost dusk and we were not sure that the path up to Salib Kasih is lit. Rest was probably the best decision, since our drivers had been driving since morning. We had dinner and called it a day.

Salib Kasih (cross of love) was lit up that night, up at the mountain. We will see it tomorrow.