Just the day before our flight, we finally came up with random names of places we want to visit in Iceland. There were blogs that we read and shared and stories from our friends who just visited the Nordic island as reference, but there was no suggestion on which one to visit first.

The fact that we had reserved a car for the entire trip probably made us complacent; There was no budget planning (even after knowing that literally EVERYTHING there was expensive), no thinking of what we were going to eat, nor thinking about what map to use when driving around Iceland. But thanks to smartphones and the (God-sent) internet, we were able to come up with routes and timings, meal plans (after knowing that each take-out or meal at the restaurant could easily cost each person SGD25), and even decide who were going to wake up first.

On the first day, we had planned to visit Thingvellir, Geysir and Gullfoss. Having located all the destinations on the beautiful free offline GPS app, Sygic, we decided to drive to the furthest one first and stop at the rest on the way back. The supposedly less than 2-hr drive turned out to be 3 hours because, well, we had the car, and we could stop wherever we wanted.

I took the wheel first that dawn (it’s weird to say this because it was 7 am, where the sun should be out in Singapore). It was 2 degree and foggy. The roads at Reykjavik were nearly empty but well-lit. It was not until we reached the outskirt of the city when suddenly the streets were not lit at all. Visibility was at most 10 metres. And I got nervous, honestly. It was the first time that we used the offline map, and I thought of the chances that I chose a sh*tty app. Luckily some of us in the car were able to use their phone data quota (which, by the way, was a deal by Three service operator in the UK) to confirm the route on Google maps.

When the daylight slowly lit the roads, we could finally see the endless moss fields on both sides of the road. There were mountains with snow covering some of the sides by the distance. That was when I thought; we should have our pictures taken here. So we did.

It was only possible to do this when the roads are clear. There were only two lanes going in the opposite directions along the long stretch of highways. If cars were to stop at random spots, it would create traffic. We did get honked by a 4WD, probably because both of our signal lights were on and the person must have thought that we had a car problem. Either that or the person was just being nosey.

Anyway, we continued the drive and stopped at some other places. And continued and stopped for gas, and were amazed by how expensive filling up half of the tank and also wondered why the souvenirs were so expensive too.

We finally reached our furthest destination for the day at 10 am. 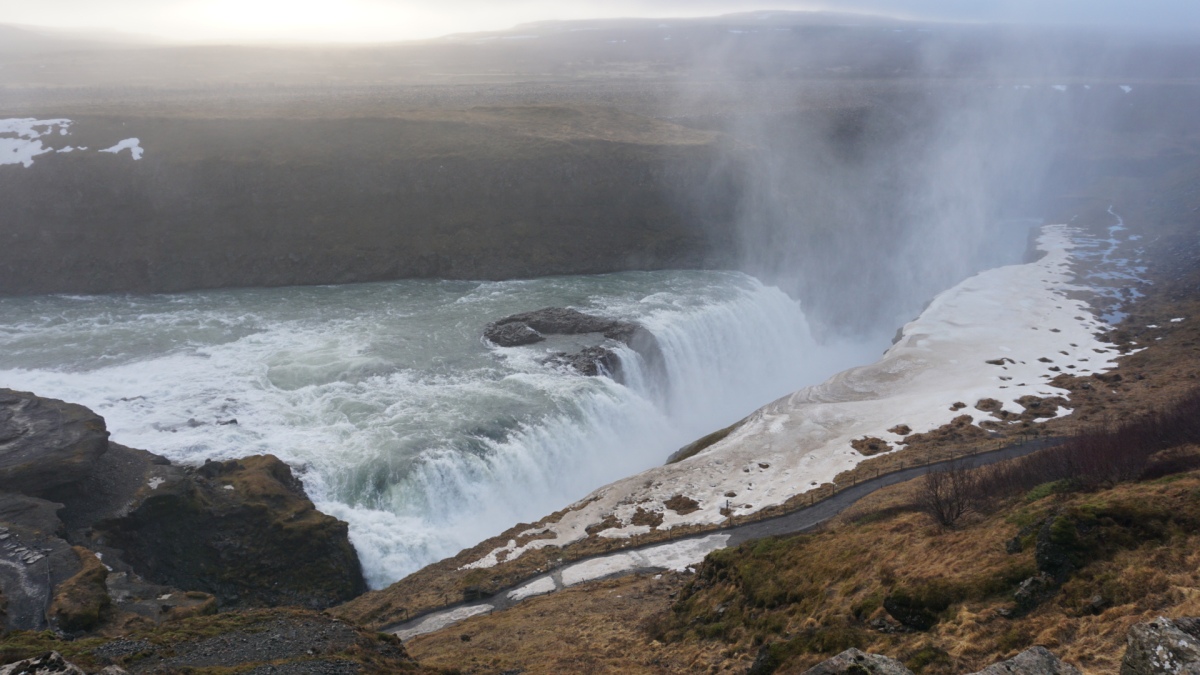 Gullfoss is a 32 metres waterfall that plummets down the cliffs on flat grounds. It is unlike other waterfalls that come down from the mountaintop. I do not think you want to read about how the waterfall actually looks like. You could google it. But I could tell you what was in my mind when I was there. I felt like I have never seen anything like it. It was the moment when I thought it was going to be a typical waterfall (and I have seen pretty cool waterfalls), except that it was not. And some geeky thoughts came to mind when I saw how wide the river was and how fast the water was flowing. It was all from melted ice caps (or glacier)! Naturally fresh and cold (probably literally drinkable) water was flowing endlessly in front of me. Keep in mind that in Singapore we recycle our sewage water. 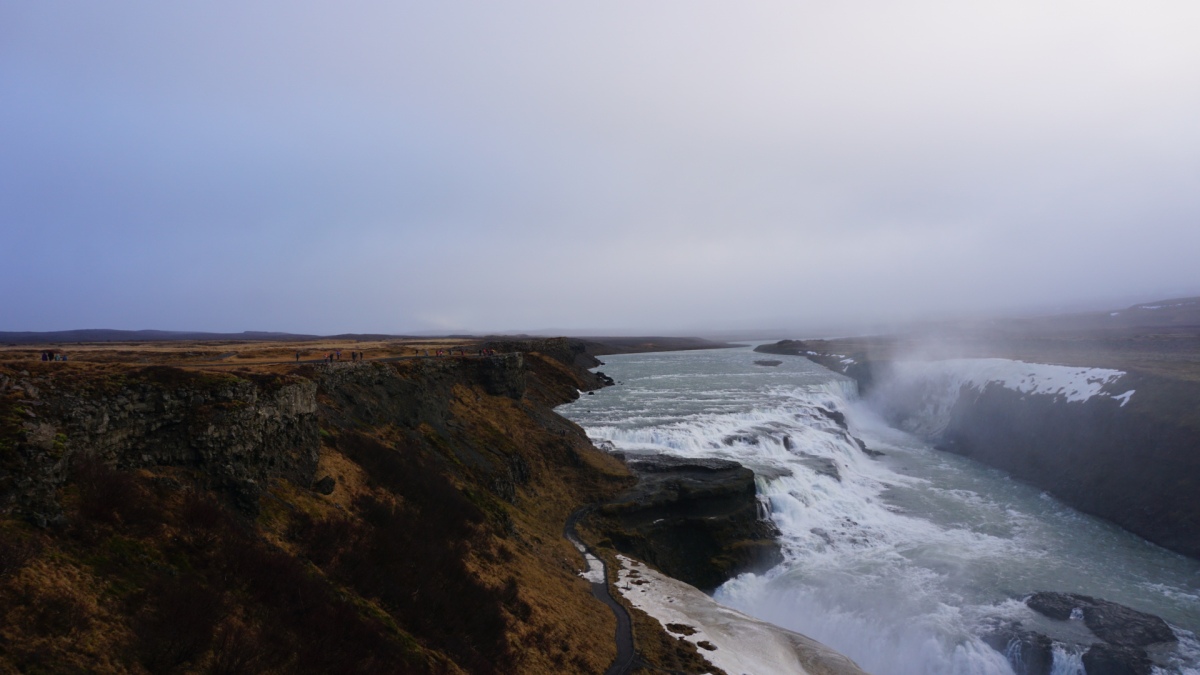 Not only that it was the coolest waterfall, but it also came with a story of one-of-a-kind environmentalist who fought with a company that wanted to harness power from it. According to the story, Sigriður Tómasdóttir, a farmer’s daughter, walked to Reykjavik to organise meetings with government officials in protest of the project. She lost her case in court, but God-willing, the company was not able to pay up their fee before the project even started.

We spent a good one hour here. The location was perfect for pictures!

Not more than 15 minutes on the road, we reached Geysir. There was one particular Geysir that erupted every 10 minutes or so, which was easy to spot because all the cameras would be on it. The thing that took a lot of our time at the location was actually waiting for it to erupt. We got our cameras ready and took loads of pictures and videos of this rare natural phenomena. Some of the eruptions were scarier because they were louder and spewed the hot water really high up to 30 meters in the air. Although the sound of spewing hot water is dangerous, most of it vaporised mid-air.

I regretted not bringing a tripod because holding my camera to wait for next eruption was not very comfortable.

The Geysir location was also a good stop for lunch. Expensive lunch. Okay, I should stop making the point that meal prices in Iceland are high. You should get by now. But the lunch that we had was great. 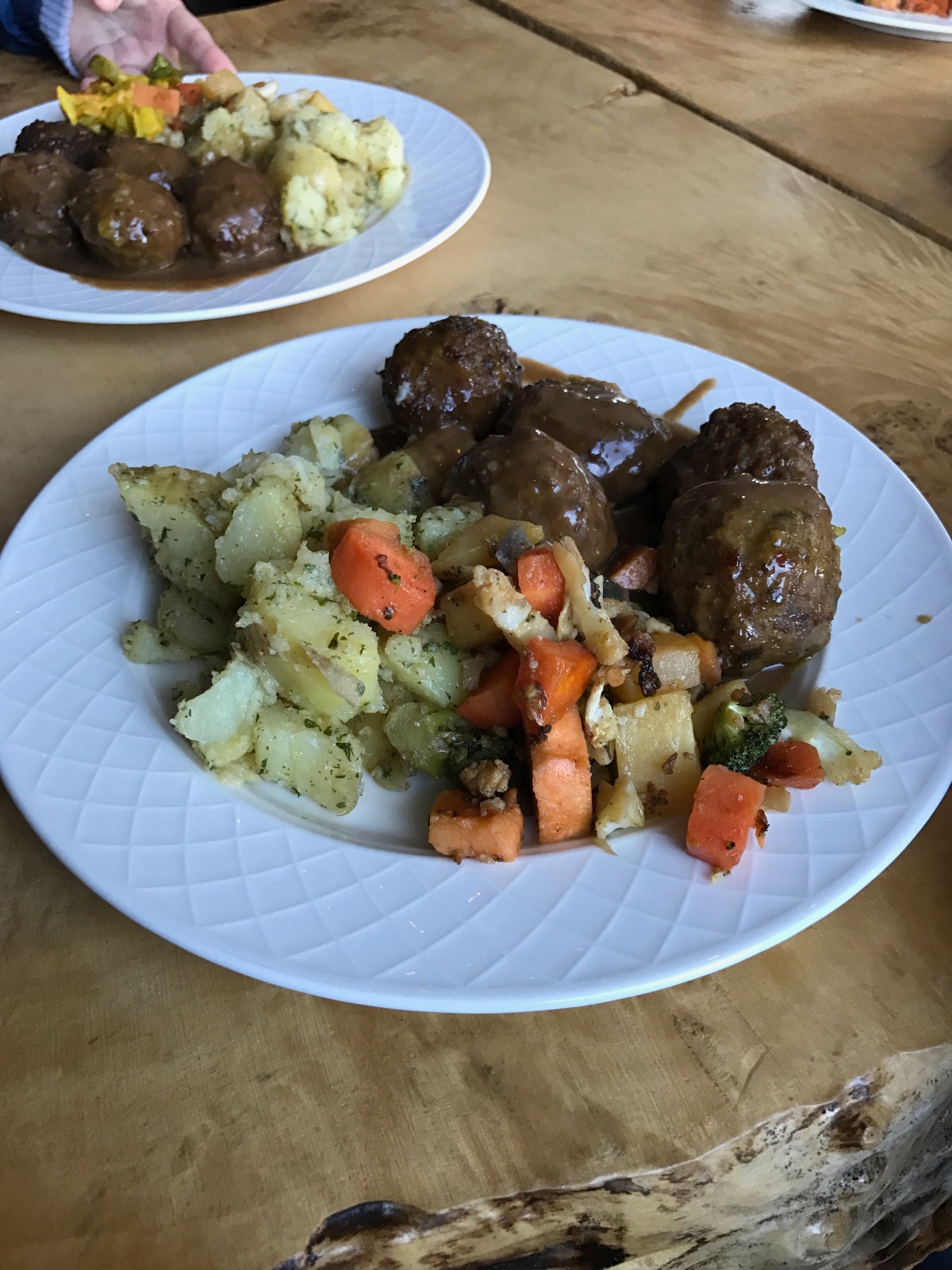 We continued the road trip at 1 pm and enjoyed the scenic landscapes of Iceland in full daylight. My friend took over the wheel this time, so I was able to snap pictures along the way. 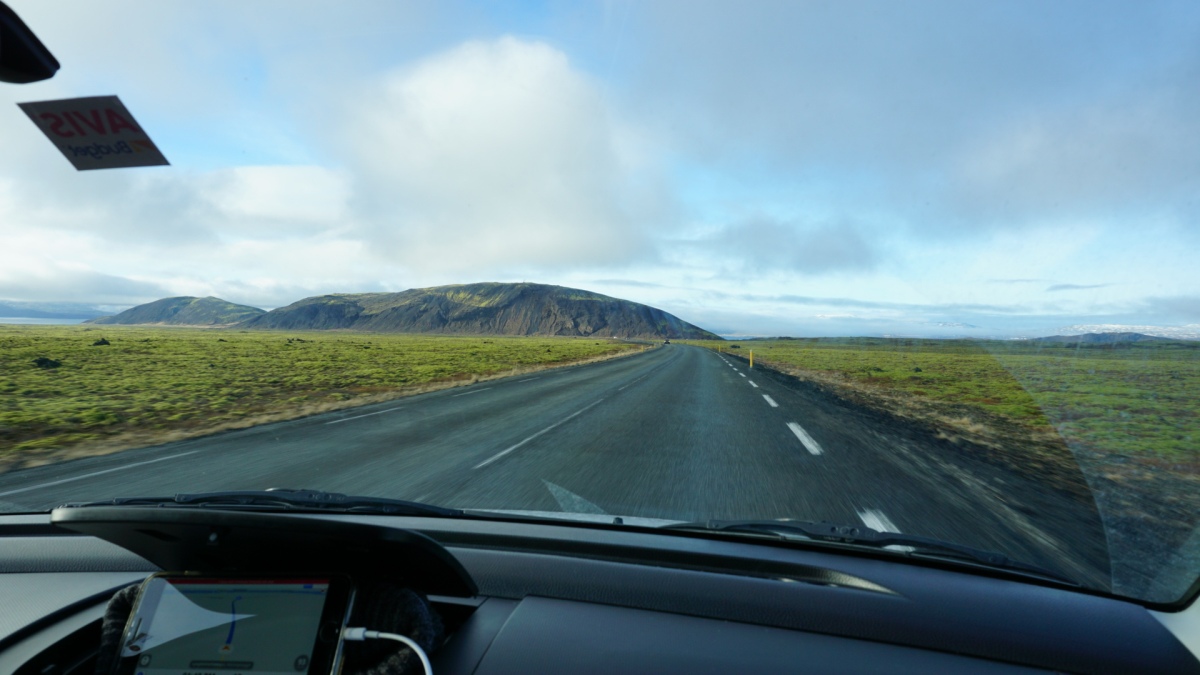 Our next destination was Þingvellir (Thingvellir). This was one of the destination showed on an app that I downloaded, Sygic Travel, which only showed a picture of a river on rift valleys. Little did I know (this proves our lack of research) that Thingvellir is actually a massive national park and also a UNESCO World Heritage Site that includes a history dated back to 10th century where Icelandic civilisation began, and spectacular views of nature; rivers, lake, waterfall and tectonic faults. There were so much to see. 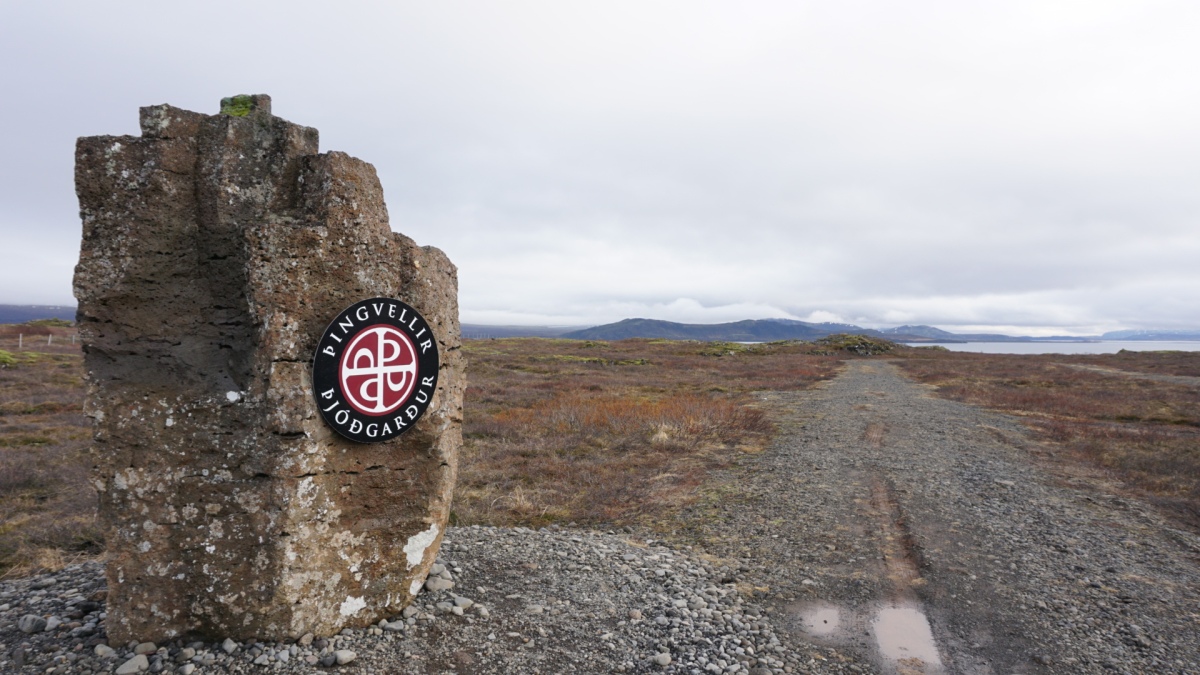 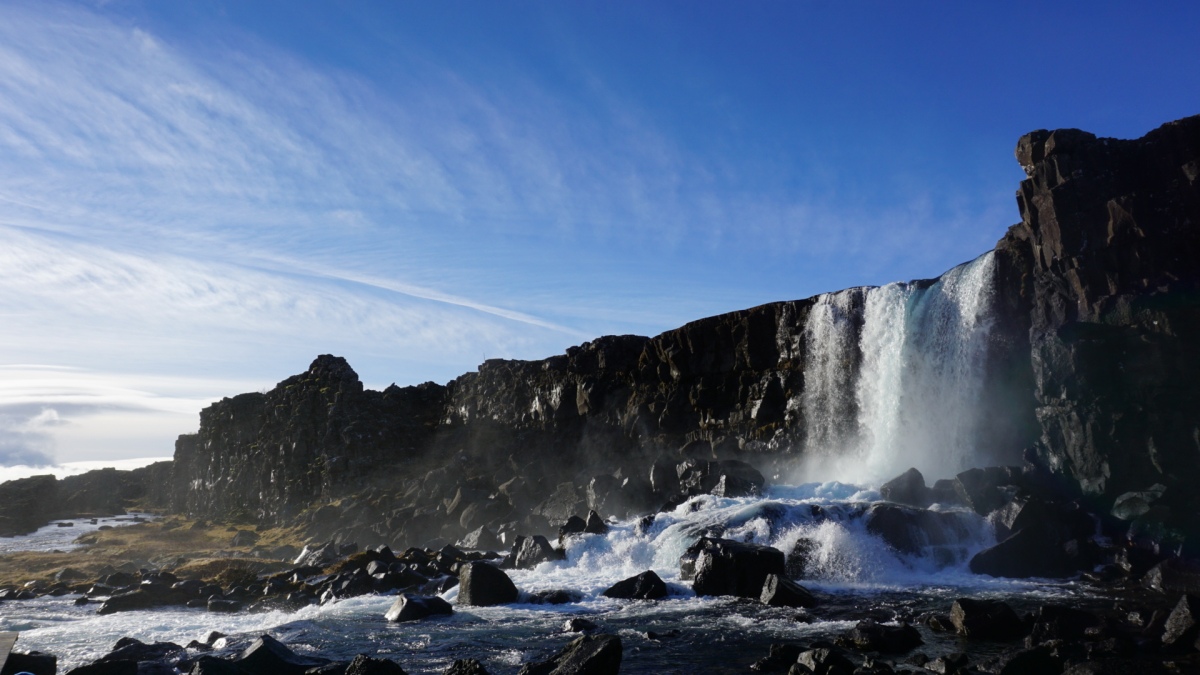 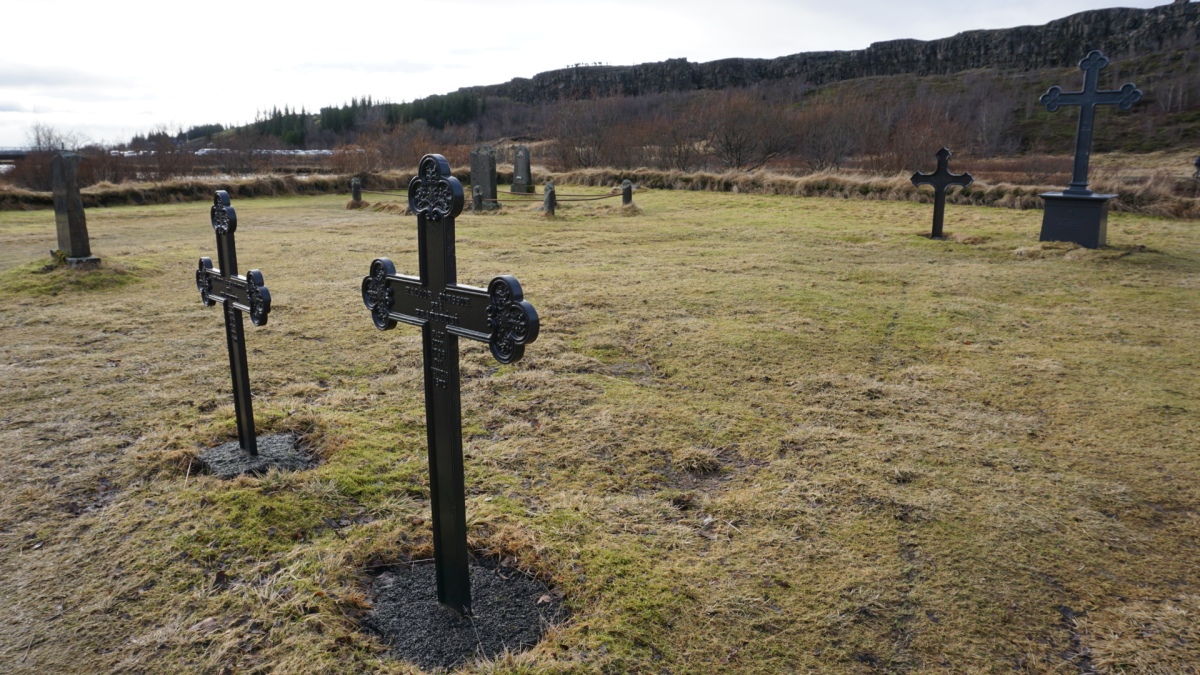 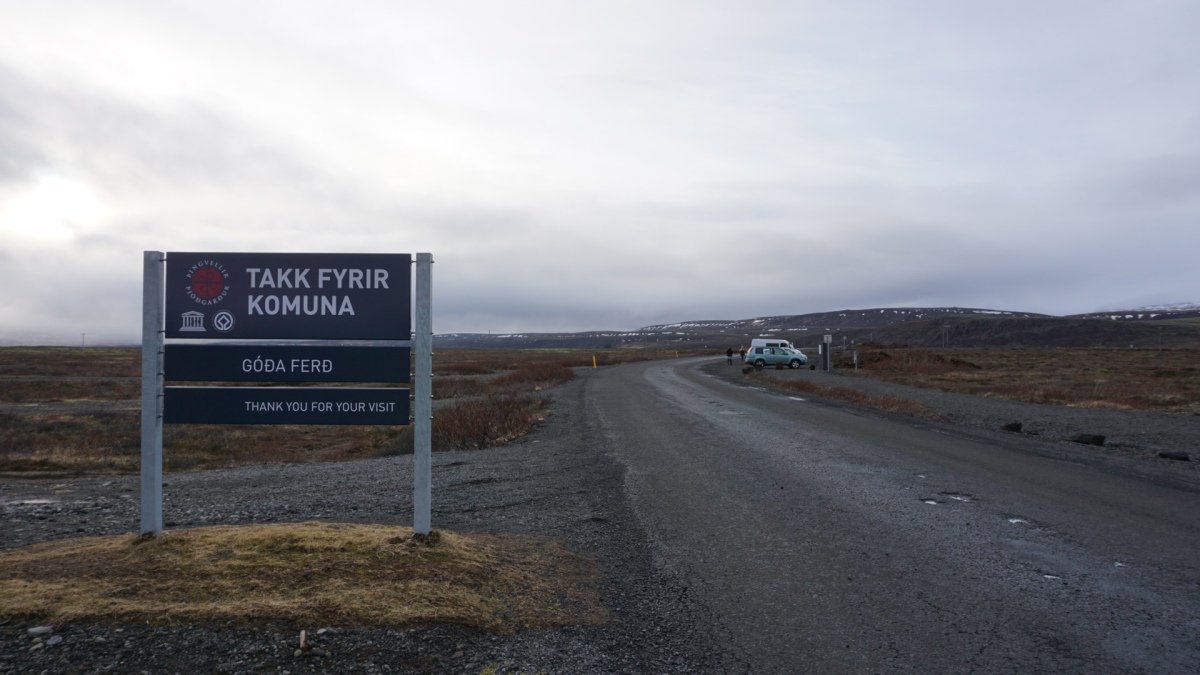 There are many carparks around the national park, which are approximate to different scenic locations. The best viewpoint of the entire park is at Hakid. Parking was about ISK500 (SGD7) for the day and toilet was ISK200 (SGD3) each entry (WHAT. You’d better do all your businesses in that toilet).

Our next destination was not originally in our plan because the location was off the road back to Reykjavik, but we still had so much daylight that we should make full use of. We decided to make our way to Kerid crater lake. Compared to the previous locations we visited, this lake was really minor, in my opinion. It was a small park that was likely to be managed by the locals. Nonetheless, it was still interesting. The turquoise lake is not connected to any river. It is just grounded water.

We drove back home after walking a full round on the crater.

To cut short till the last activity of the day, we went hunting for Aurora.

We read info about Aurora activity from this site. It tells the likely location of the northern lights in real time. Apparently, there are apps out there that do the same thing, but this was the only source we knew at that time. Just right on the night, the position of the solar wind was around south Iceland. We headed out in the hope of seeing our first northern lights.

At first, we drove just along the coast of Reykjavik to the presidential residence, Bessastaðir. But the location was not dark enough to catch the lights, albeit great view of Reykjavik from the opposite coast. So we decided to head out of town in the middle of the night. After getting on an empty road with no street lights and completely in the dark, we stopped and switched the headlights off. And We waited for a while. And then, there it was; A glimpse of wavering shades of green in the sky. It was the moment of awe when one of my friends and I said at the same time, “Is that..?”

Within the split second of realising that our reactions confirmed what we were seeing, we got so thrilled and rushed out of the car to get a better view of it. The lights grew bigger and more distinct before they vanished completely.

We drove further to one of the lakes towards the south, hoping to catch the lights again. But the sky turned darker, and it rained as we get to higher grounds.

On our way back to the city, a part of us felt teased and dissatisfied with the nature phenomena. We knew we could not control it, but we thought there must be something we could have done. We checked the northern lights status again, and according to the site, it should still be there.

The sky was clear again just before entering the city. So we parked the car again at a junction along the way. I thought, maybe, the lights are there, but they are too weak to be seen with naked eye. So I set up the shutter on my camera (again, I thought of the tripod that I should have brought), and placed my camera slightly slanted on top of the car against its antennae.

Iceland, you land of natural wonders. It had been a fun-filled day.

2 thoughts on “(Half of) The Golden Circle”