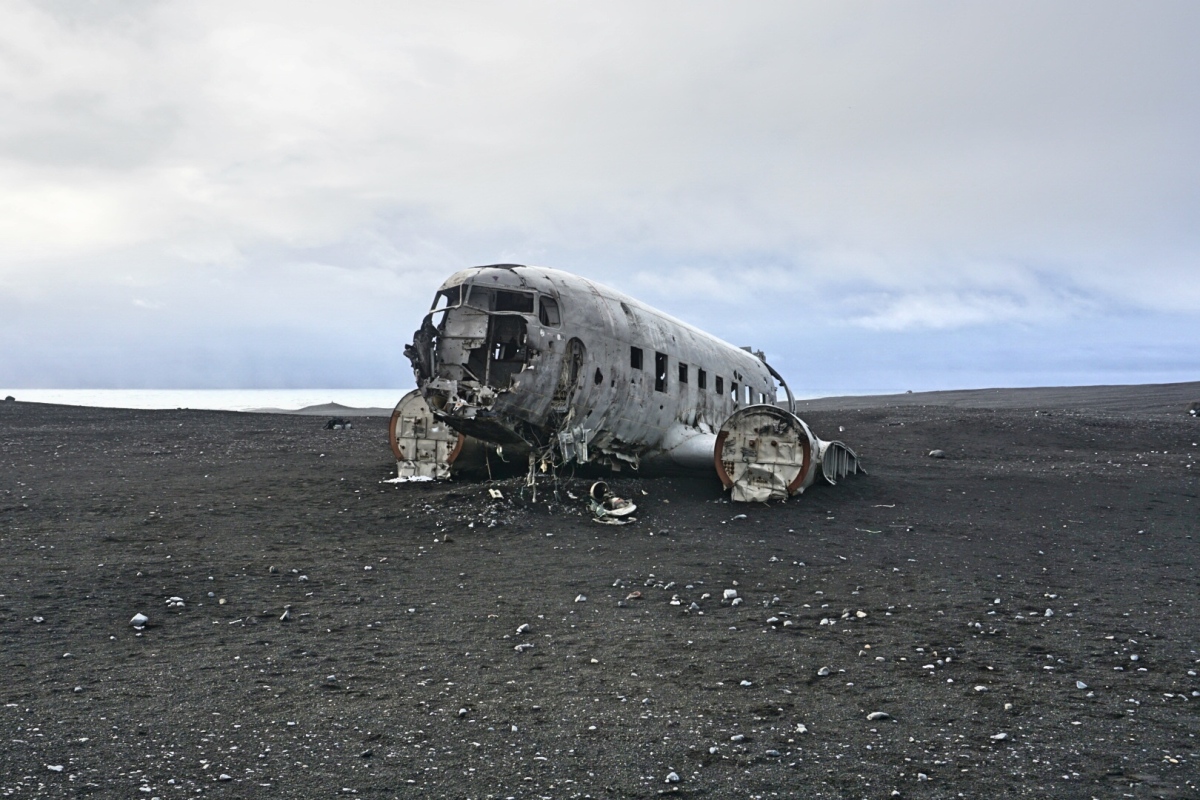 We drive in limited visibility in a snow storm with a car that could skid at anytime. The fact that we got to our destinations safely made it all worth the risk.

We woke up pretty late from planned, but it was still dark. Only a few minutes after rushing from our place to the car park, I felt my body starting to shiver. There was heavy snowfall that got worst as we left Reykjavik. If I could guess, visibility was only about 30-50 metres ahead of us, probably even less because I could only see two cars in front of ours moving slowly and close to each other. Today was my first experience driving in heavy snow.

The snowy road getting out of the Reykjavik, albeit was already making me on guard, was almost nothing compared to the dimly lighted icy roads after the highway. Cars moved slowly on roads covered by snow. It made sense because it was hard to see what was in front. Besides, the icy road was dangerous to drive at speed. I guess it also helped cars to stay on a safe path by following the previous car.

As we left the highway, the road condition worsened. With less car passing by the road, the snow slowly mounted causing the stirring wheel to get heavier and more tricky to handle; a slight jerk could have skidded the whole car in unpredictable directions. I found myself focusing on the two carved paths by previous cars and steady control of the wheel. Periodically we saw snowploughs that helped clear the snow off the road. But as we drove further towards the east, there were less of them.

At one point along the way, our road was blocked by accident at about 300 meters ahead of us. The policemen were already there with few spotlights lighting the area. Some cars had started crossing to the other road by common soft grounds found around the roadsides of Iceland. While some cars preferred to wait and even turned back, we decided to take our chance driving by the soft grounds. It was rather a stupid idea, actually. But, thankfully our rented Suzuki Swift managed to overcome one muddy patch that caused the car to get stuck for a moment. It was instinctive for me to accelerate the car while thinking, “Oh, not today.”

The sun slowly rose and the snow subdued, leaving white blanketed view on both sides of the roads. We passed by at least 3 cars that skidded to lower grounds. One cargo was even overturned. After driving in such condition and realised that the road condition was getting much better with less snow, I felt a sudden surge of energy. It was fortunate that the other driver in the group was on standby and ready to take over the wheels. I slept almost right after I moved to the back seat.

It took us 40 minutes to walk from the carpark to the plane wreck at Solheimasandur. It got boring after 20 minutes because there was literally nothing along the way. It was a plain view of a black-sanded field all the way to the plane wreck location. We spent our time walking to the site talking about anything under the sun. We even took loads of IG Stories along the way. Not that anyone would watch it anytime soon because we did not have internet access. But upon reaching seeing the site, it was pretty impressive. The plane wreck became unique to Iceland because of the impressive coastal view of black sand beaches of southern Iceland. I could hear the large waves crashing from the distant and see snow-capped mountain ranges at the other end of the view across it. It took us about 40 minutes to take pictures at the plane wreck, taking turns with the other people that were already there before us. The walk back to the carpark, as you could imagine, was so boring but we had no choice. Fortunately, the pictures of the plane were worth all the effort. 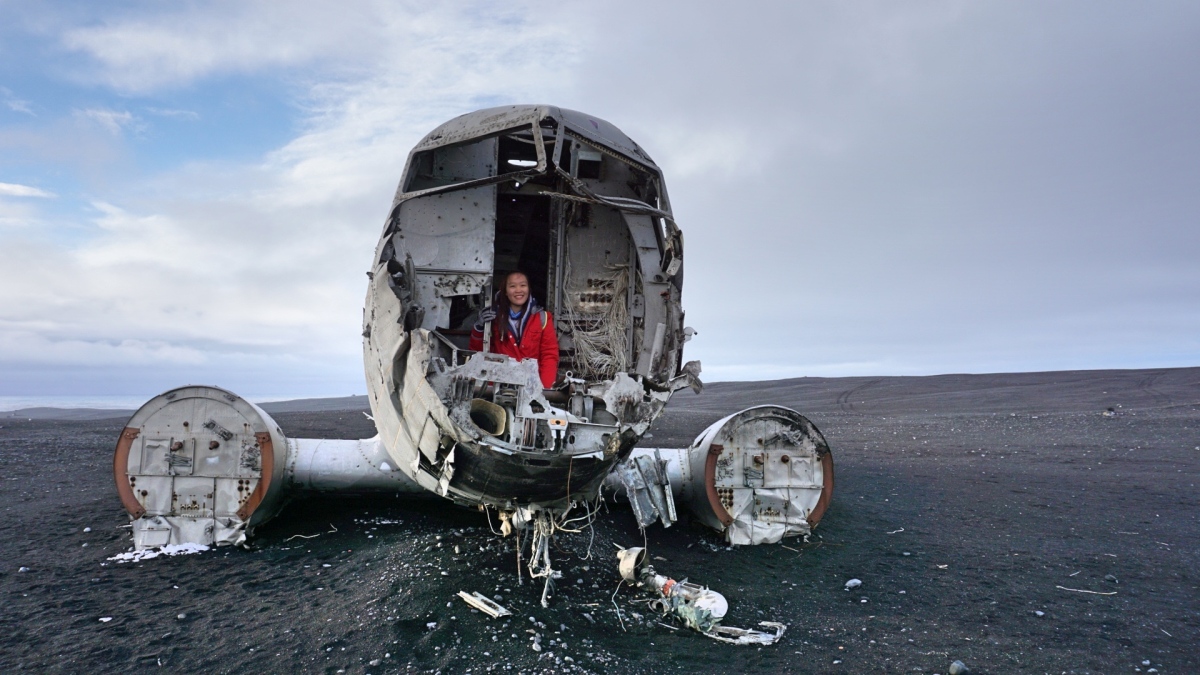 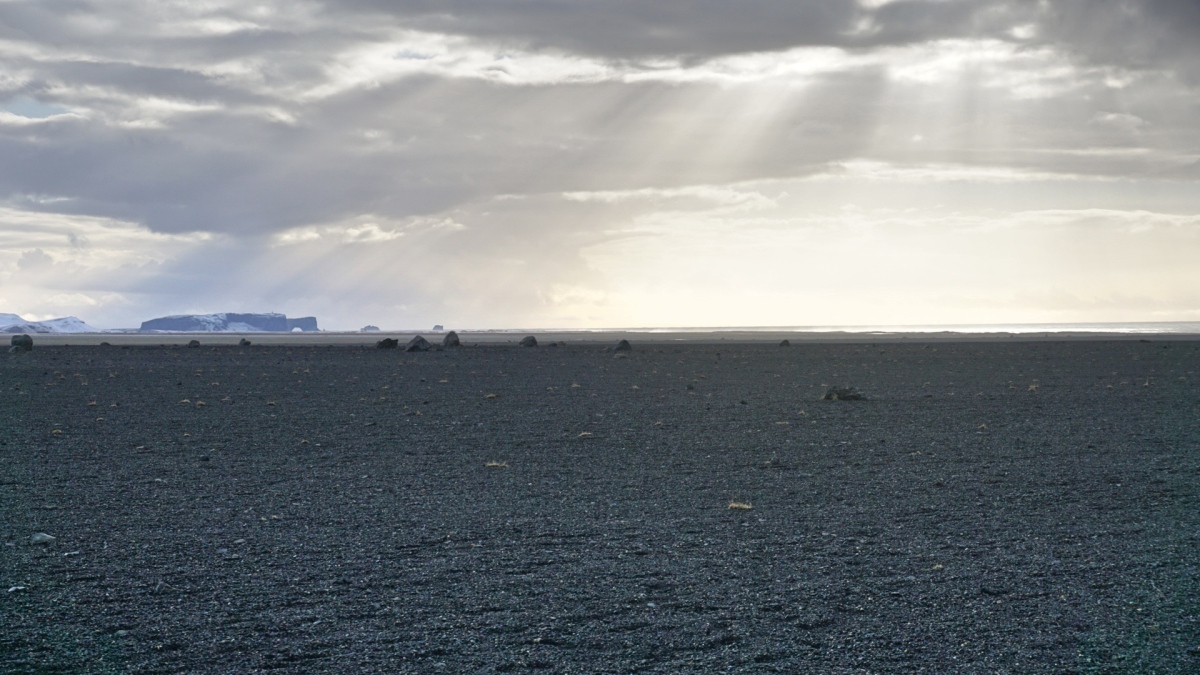 Solheimasandur was the furthest destination on out list today. We had planned to stop at every waterfall that was on the way back to the airport,  where we decided to spend the night to catch the morning flight back to Edinburgh.

The first waterfall was Skogafoss. This is the largest waterfall on the island by width. I was not particularly interested in the legend that comes with the site, but it is worth mentioning. Legend has it that there was treasure hidden behind the waterfall, which was the former coastal cliff of the island before the beach drifted to the lower lands. According to the story, a local managed to find the wooden chest and tried to pull it by the golden ring at the sides. The ring broke and was donated to the church. It is now used as door handle in one of the nearby church. I have no idea if this was true or if the door handle of the church exists.

We went up to the top of the waterfall, and the view was fantastic. There, I could see the coastlines with beautiful green fields all around. I was told by a friend that the track at the top of the waterfall is a part of a popular hiking route around Iceland, but the access to the field was closed for the winter. It ‘d be good to have the chance to hike around Iceland someday.

We spent quite some time to settle before and after our visit to the waterfall at cafes nearby. It was just the perfect weather to sip a cup of hot chocolate or even a bite.

I realised that rainbow and waterfalls are complementary to each other in good weather. At the second waterfall we visited, Seljalandsfoss, no less magnificent view of rainbow greeted us. Noticeable along the cliffs were other small waterfalls. It was just amazing. It is hard to imagine a more spectacular view of waterfalls and rainbows. Iceland just won everything. This waterfall was also unique because people could go behind the waterfall. Although would end up drenched and soaking wet, it was still a good experience. Luckily, we had all our stuff in the car to change into dry clothes. 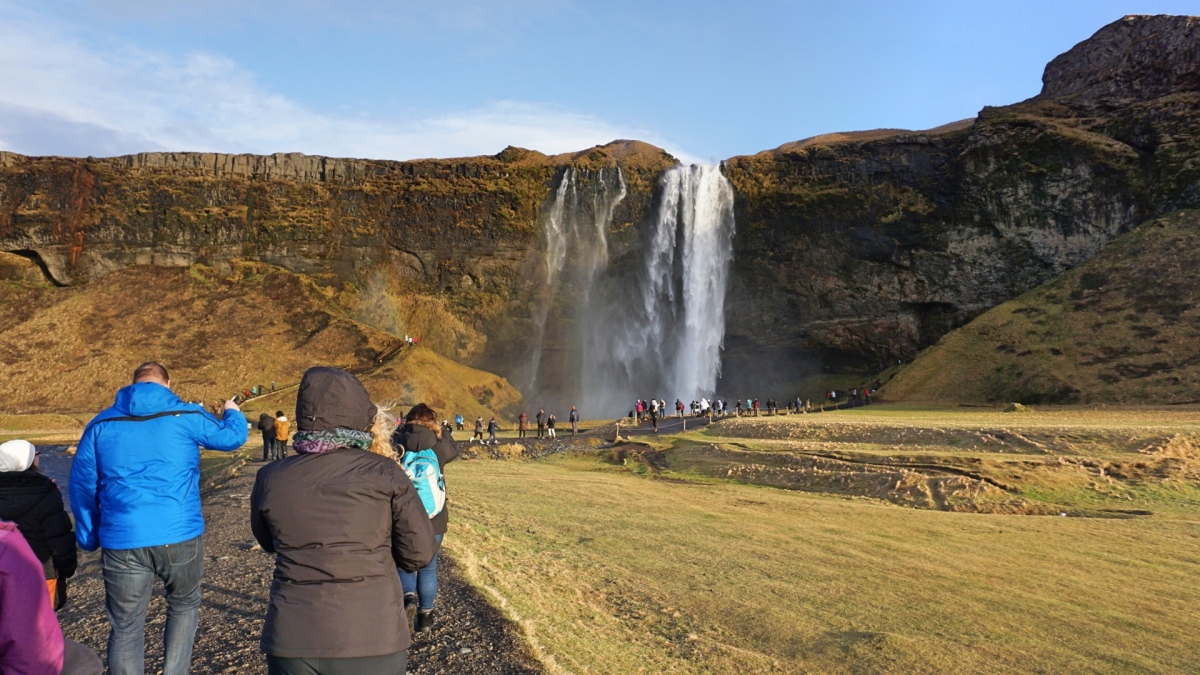 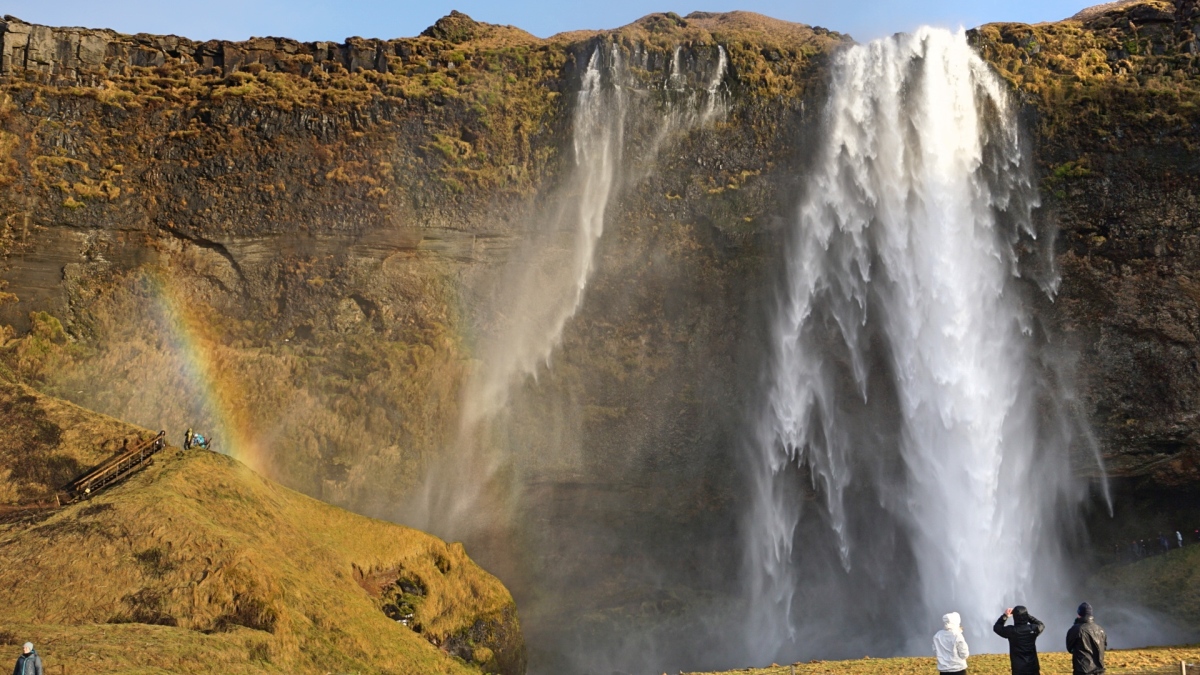 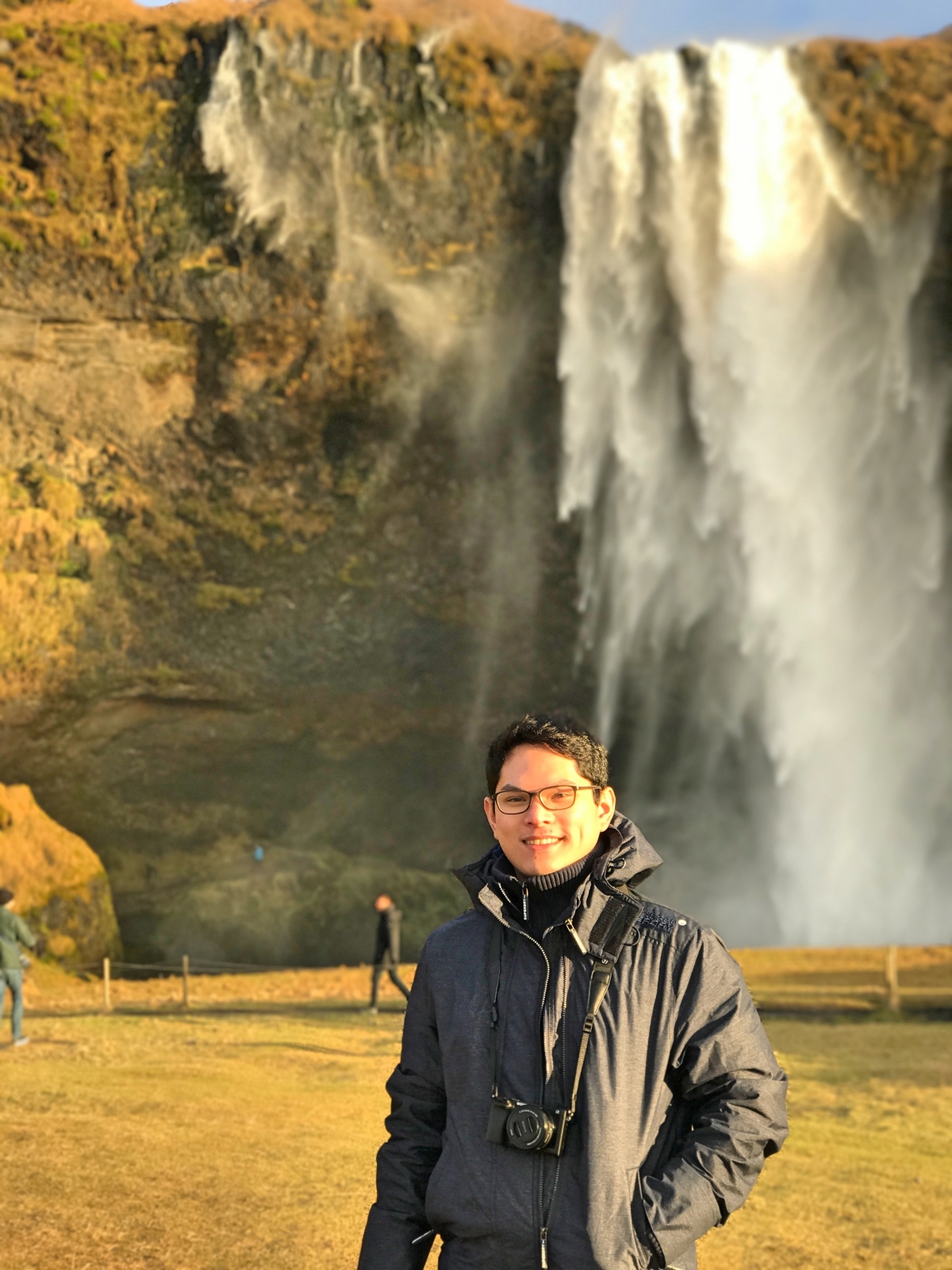 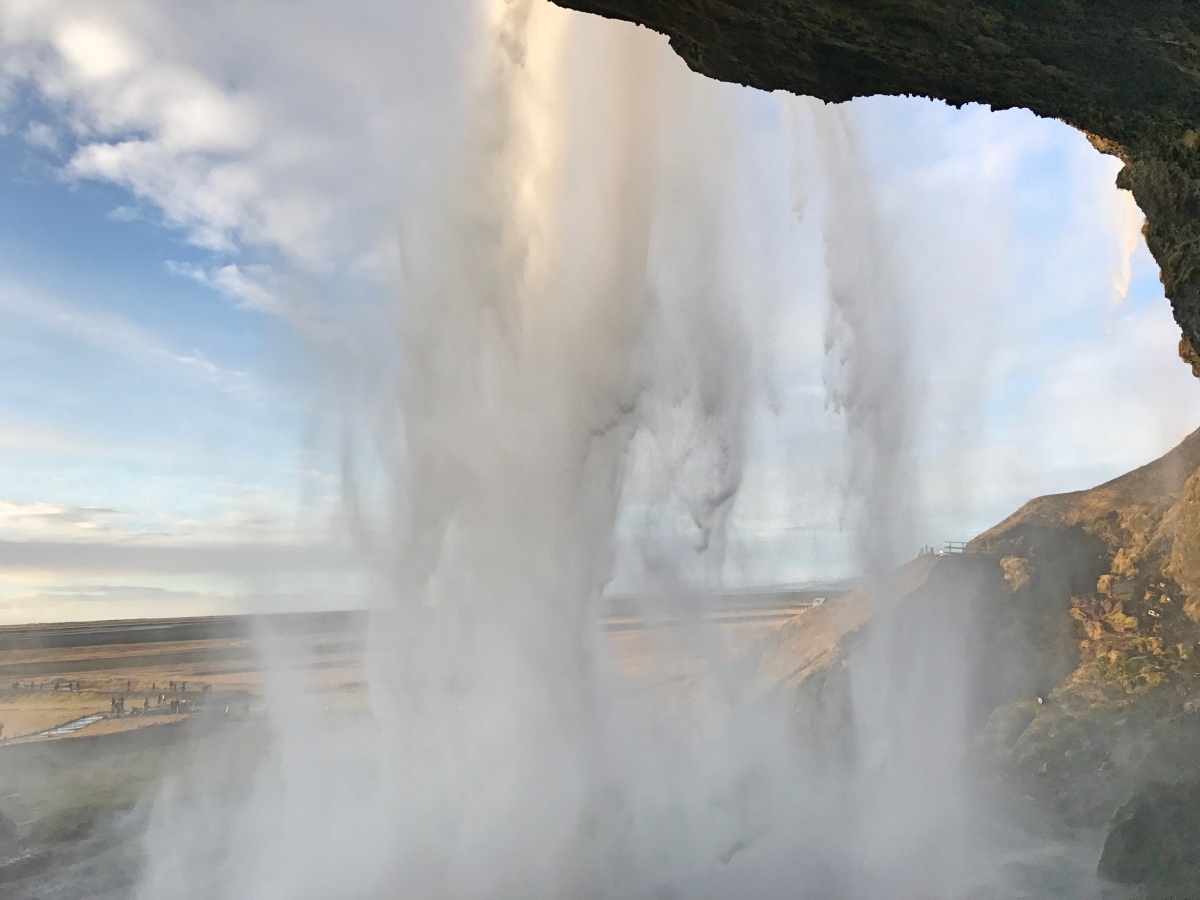 We managed to visit Blue Lagoon where it was must reserve way beforehand, which we did not do. It was good enough to take pictures at the sign, though. Well, maybe next time, I could better plan a trip to Iceland and enjoy the ridiculously busy (and expensive) thermal bath.

Before getting to the airport, we ate at a random barbeque ribs franchise by the roadside and spent what we have left with a good amount of ribs. It was a simple dinner to end the day on the island.

Just to summarise the entire trip, a road trip in Iceland is definitely a must-do. We listened to the same playlists over and over, took the wrong turns because the GPS lagged, stopped randomly in the middle of an empty road at dawn to take blurry low-light pictures, wondered if we were gonna reach the destinations safely because the car skidded over icy roads, tried to figure out how to prevent the windscreen from getting fogged up and helped the driver to wipe it with newspapers, held our pee till the next petrol station or sometimes just stopped somewhere the do it, drove so slowly at foggy non-lit roads and questioned if there was ‘something’ out there, and of course bonded with people in the car. There were snacking, eating cold bagels with eggs and huge sausages for lunch and dinner, and red bull or coffee drinking just to stay alert. And I also need to mention that the experience of driving on the right side of the road for the first time was not so bad after all!