Hands down, the best city thus far. I still could not believe this is the capital and the largest city in the country. It is so far from how I expected the capital of a country should be; chaotic, dull and crowded.

It is a two-hour bus ride from Zagreb. Rain started pouring heavily on the high way towards Ljubljana, Slovenia. I had planned to only stay for a day in this city, without prior knowledge of even how to pronounce its name (which was lyoo-BLYAH-nah or Lublana). My next destination was to Venice, Italy. But I thought the journey to Venice would be too long to do in a day, so I should explore another city just for the sake of not being on the road for too long. Clearly, I had made a mistake.

Upon reaching the rather small bus terminal, I had a bit of difficulty finding information about the mode of payment for the public bus. People at the bus stop did not speak any English, neither there was any English on their posters. But it was an obvious enquiry at the counter when the person at the desk pointed at a local bus card and wrote down on a piece of paper how much it was. Luckily for me, google map was working fine. I got on the bus to get to my hostel.

The bus stop did not stop right in front of the hostel, though. I had to rush in the rain. Thank God for Timberland boots. At about 11 AM, every shop was still starting the day. The streets were empty, and there was no one at the hostel lobby. I found a lady mopping the floor in the basement. She quickly hosted me back upstairs and told me where to put my bag before checking in the afternoon. She gave me brochures about the town and very kindly told me about what to see in the city. I did not pay attention to her, honestly. My head was still all over the place; rushing under the rain, walking in with muddy boots over the cleaned floors and her friendliness with such fluent English. I only took all the brochures she had given me and thought that everything I need to know should be in there.

The rain did not show any sign of stopping. Come to think of it, I do not know why I did not ask for an umbrella or something.  I missed the free tour, and it was almost lunchtime. I was getting hungry. But, out of a sudden, the rain stopped, and the sky turned clear. The weather turned out really nice, with cold post-rain humidity. The sun had been out the past few days of travelling, and it got warm to walk around. So with the current weather, that rain was the best thing that had happened.

I was told by the lady that there was a good restaurant right around the corner that would give me a free shot if I mention the hostel’s name. In my head was Cracow flashback. But I tried to be calm and just thanked her for the info. I did give in to her suggestion and no regret at all. I had the most tender wild boar stew ever. And to top it off, a lovely cherry liquor which was free upon mentioning that I stay at the hostel down the street.

The funicular to the Ljubljana castle was right next to the restaurant. I found the student deal pretty worth. For €7, it includes the funicular and the castle entrance. There is a way up to the castle by the trek surrounding the hill, but with the deal, it was a no-brainer for me.

I went straight up to the viewing tower before exploring the rest of the castle. I realised that the whole city was surrounded by mountains, which was such an incredible place to live in, I guess. On the way to the top of the tower, there was an interesting window with lines on the glass panels. Each line had a name with the individual meter label next to it. A few centimetres outside the glass panel was a thin metal rod, such that when I aligned the lines on the glass with it, it tells me the name of the mountain it was directed at. I had never seen such smart thing before.

I took the forest road down to the foot of the hill towards the old town, where I realised that the streets were rather quiet. It was a pleasant walk with the air still smelling fresh after the rain. After walking across the Triple bridge over Ljubljanica river, I passed the main city centre which was filled with tourist tour groups. I saw familiar franchises like H&M and McDonald’s around. But I thought of getting the next high viewpoint of the city which was the skyscraper, Neboticnik. I got there with slight confusion because I expected the crowd would actually extend to this part of the place of interest. I was curious how the city, especially the castle on the hill would look like from a distant. 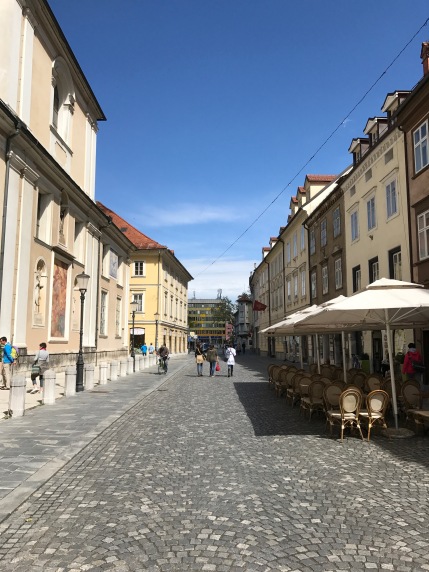 I did not have to pay a single cent to get to the cafe at the top. I just had to pay ~€1.5 for a cup of cappuccino at the balcony and enjoy the view.

I was satisfied with my pictures of the city from a high point. With so much time to kill, I decided to walk further away from the crowded old town. The straight roads of the city lead me to Tivoli Park. I was impressed with the fact that such a vast national park existed within 15-20 minutes of walking for the city. Narrow treks, asphalt roads, dense trees, playgrounds in the woods, art pieces by the park entrance were only some of the features I saw.

The most lovable moment I saw in the park, besides a bunch of kids rollerblading around a basketball court, was this guy reading under a tree in the woods. He was leaning against a slanted tree which happened to be shone by the sunlight. The smell of dew that was rising due to the afternoon heat probably made the atmosphere even cosier.

After walking for more than an hour, I walked back to the centre of the old town. Tour groups still crowded the place. I think the square was a resting point or something. There were street performances by a group of Buddhists, beating leather drums, jumping around the square. If I were to guess what they were doing, they were spreading some kind of joy aura, which was working. They lighten the mood, at least for me, in the crowded place. Even better, one of the monks approached me and gave me an enlightenment booklet, to apparently travel to other planets.

Ljubljana was founded by a guy called Jason. Well, I expected a more charismatic name, but I guess Jason was probably pretty rare back then. Jason was a Greek criminal who ran away with the king’s daughter. On the journey up north, evading the army sent to capture him, he decided to settle at the banks of Ljubljanica river. There he encountered the fire-breathing beast. Long story short, he defeated the dragon, which became the icon of the city. It was said that the dragon’s den was located on the hill where the castle now stood.

The legends, the old town, the castle on the hill and the statues of dragons made the entire city seemed like a themed city. I loved how the local integrated the folktale into the old city arrangement. It made the fantasy believable.

I had a simple Slovenian food for dinner before getting back to the hostel. I met roommates who happened to visit Bled lake, which looked terrific on Instagram. Sadly, I did not have the time to check it out as I originally planned a short stop-over in the city. Such a bummer really. The guys asked me out for a drink, which made me think of Cracow. So I said, “No, thanks.” Besides, I was exhausted from walking the entire day and had to wake up early to catch the train to a view stops before making it to Venice, Italy.

It was going to be a hell of a day.